Optimal English rhymes are word pairs with the same nucleus and coda (if present), but with different onsets. Identity rhymes refer to the rhymes with the same onset. The identity rhyme is acceptable according to Great Song Revised and Expanded Rhymes, while in English poetry, it is considered to be “unconventional and even unacceptable” and to “fall ridiculously flat” (Wagner & McCurdy 2010).

This paper reports on a study of identity rhymes in Cantonese and Mandarin. As in Wagner and McCurdy’s 2010 study on French and English, this research seeks to find the extent to which Mandarin and Cantonese speakers consider rhymes with the same onset, identity rhymes, to be good. Furthermore, we consider what impact, if any, tone has on rhyme quality.

Contrast to the definition of rhymes in English, in Middle Chinese, the predecessor of Mandarin and Cantonese, rhymes with the same onset are allowed. Further, a level tone cannot rhyme with another level tone, and a non-level tone cannot rhyme with another non-level tone (see *Great Song Revised and Expanded Rhymes (陳 and 邱 1008)). According to the anecdotes of some Mandarin and Cantonese speakers, the identity rhymes are considered natural but there was not a perception study to test that judgment. We will examine if these constraints on rhymes in Middle Chinese also hold in Mandarin and Cantonese. If similar restrictions on rhyming based on tone were to hold in Mandarin or Cantonese, it would be important to see whether these restrictions correspond with present-day tone pronunciation or the historical Middle Chinese tone category[2].

In Wagner and McCurdy (2010), the native French speakers rate as good both identity rhymes and “good rhymes” (rhymes with different onset but same nucleus and coda). We designed a comparative experiment based on Wagner and McCurdy (2010) to see what instincts Mandarin and Cantonese have on rhyming syllables with the same onset. We find that Mandarin and Cantonese follow Middle Chinese in allowing identical rhymes.

We further tested whether tone affects rhyming judgements in Mandarin and Cantonese and found that, unlike in Middle Chinese, it does not.

We had ten Mandarin speakers and nine Cantonese speakers listen to several mini-poems in a random order. Each mini-poem had one of four conditions:

Following the ‘within’-style design, the participants listened to every mini-poem in their chosen variety. With the goal of comparing the quality of the four conditions, the experiment had participants rate the rhymes from 1 (Very Bad) to 6 (Very Good). After the main part of the experiment, they were debriefed and asked to provide feedback.

The participants did not receive compensation and were not run on any other experiments.

The following examples are transcriptions of the mini-poems participants listened to[4]. The highlighted syllables are those whose rhyming quality was evaluated. Cantonese is transcribed in the International Phonetic Alphabet and Mandarin in Pīnyīn.

The first two graphs (below) demonstrate how Cantonese and Mandarin speakers ranked each condition’s rhyme quality. The number next to each point represents the arithmetic mean rating for each condition. Speakers expectedly ranked DiffFinal as poor; the other three conditions, having overlapping error bars, show no significant difference in their average rating. 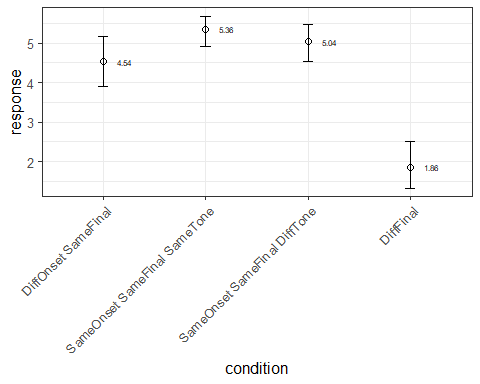 Response of the Mandarin experiment by condition 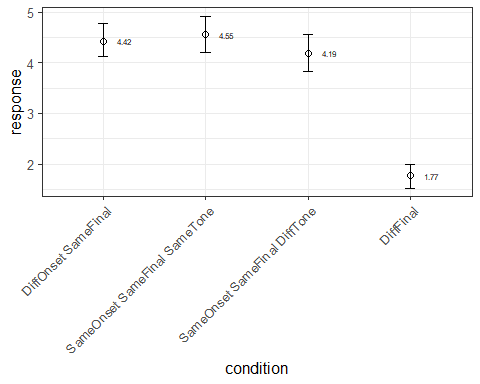 Response of the Cantonese experiment by condition

The third and fourth graphs break up the data by item set, as labeled by the number above each sub-graph. As with the first two graphs, speakers consistently rate DiffFinal as poor and the other three conditions as good, with insignificant differences between these three. 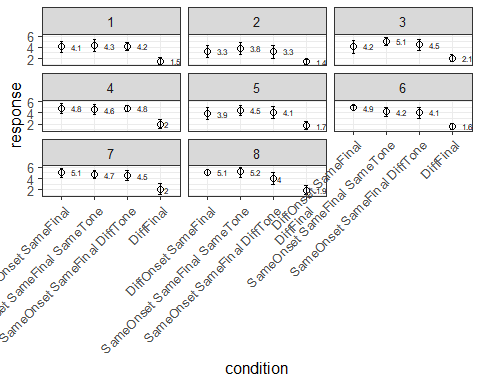 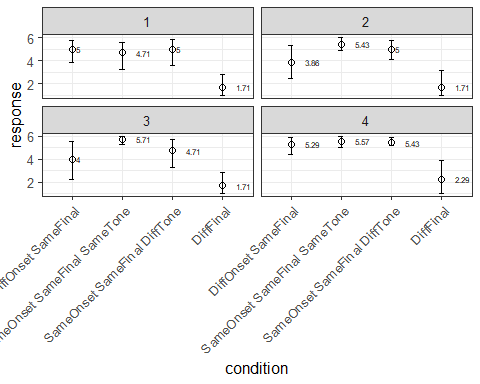 The following are examples of feedback for the experiments (translated if necessary).

Particularly helpful was the following feedback from a Cantonese participant. This person’s frustration at the lack of traditional Chinese, odd ordering of place names, and the lack of clear bilingual option point out important flaws in our pre-experiment survey which are to be rectified in future work * the survey is written in simplified Chinese, which is unfriendly to Hong Kongers *The first question was about place of birth and residence, to be chosen from a dropdown menu. The names are listed in Chinese but follow the alphabetical order in English. This is confusing (e.g., I had to look for 香港 (Hong Kong) somewhere near the middle, and extract it from 海地 (Haiti)， 洪都拉斯 (Honduras)， etc.) * This is where I gave up: you are only given one choice for ‘mother tongue’, but I consider myself as being bilingual from early childhood and can’t really decide whether Cantonese or English is my mother tongue. I could not continue without the ‘bilingual’ option.

From the results we obtained as shown in the plots above. Mandarin and Cantonese speakers have similar perception about the rhymes as what was tested in French (without the presence of tone manipulation). Speakers of Mandarin and Cantonese treat identity rhymes favorably in contrast to rhyme pairs with different nuclei and codas (if present).

Note that, unlike in Middle Chinese, two level-toned syllables rhyming are judged as good. For example, In Cantonese item set 2 (given in section 4 above), the last syllable of the second line is 知 /͡tsiː˥/ which bears a high level tone[5] On average, speakers rated the rhyme between 枝 /͡tsiː˥/ and 知 /͡tsiː˥/ as good (in fact, slightly better than 指 /͡tsi / and 知 /͡tsiː˥/ where 指 has a rising tone). Despite both syllables having a level tone, they are still are good rhymes. Mandarin Item sets 4 and 8 demonstrate that Mandarin also shows little difference in judgment between level tones rhyming with non-level tones and with other level tones. The observation here is that Mandarin and Cantonese do not follow the rhyming constraint by tone contrast from Middle Chinese.

Future research could focus on the impacts of this study on Wagner and McCurdy’s discussion of the Williams effect. Like English but unlike French, Mandarin has anaphoric destressing. If Mandarin (or Cantonese) were found to also have the Williams effect, this would serve as counter evidence against Wagner and McCurdy’s account of English and French differences. Furthermore, as discussed in Cheung 1996, Cantonese syllables with different codas may be considered good by native speakers as long as they have identical nuclei. We can examine these features in Mandarin as well by utilizing nasal codas (Plosive codas do not exist in Mandarin but they exist in Middle Chinese and Cantonese).  Future work could incorporate judgments on coda variation. An improvement to the methodology would be including a Traditional Chinese option. As discussed in the Feedback section, a participant was offended by the settings and decided to quit the experiment.

Peter Qian is a 4th-year Linguistics & Computer Science major. He is interested in exploring how machines understand human languages and learning new languages in general and hopes to be a data analyst after his BA at McGill. He likes cooking and cycling

1. We appreciate the feedback and advice provided by Professor Michael Wagner, who is a Professor of Linguistics at McGill University.

4. Participants did not see these written versions of the mini-poems.

Orientations is a student-run and peer-reviewed journal offering transcultural perspectives on a wide variety of topics related to East Asia, such as language, literature, history, culture, art & cinema, religion and activism. +++ Land Acknowledgement: Orientations recognizes that McGill University is situated on the unceded territory of the Kanien'keha:ka, and is located on land which has long served as a site of meeting and exchange amongst Indigenous peoples, including the Haudenosaunee and Anishinabeg nations. Orientations stands in solidarity with indigenous students here at the university. View all posts by Orientations EAS Journal